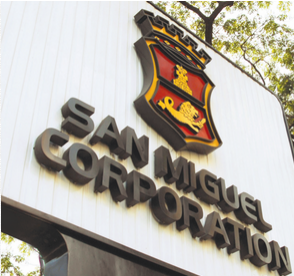 San Miguel Food and Beverage, Inc. (SMFB), the food and beverage flagship of conglomerate San Miguel Corporation, registered consolidated revenues of P137.4 billion for the first half of 2018.

The amount represents a 15 per cent rise from the same period last year, as combined net income and operating income went up 20 per cent to P15.4 billion and P22.9 billion, respectively.

SMC completed the consolidation of its food and beverage businesses last June 29, 2018, thus, the performance numbers reflect the consolidated financials on a comparative basis with last year.

San Miguel Brewery Inc. (SMB) continued its solid performance delivering strong volumes for the first half driven by increased consumption of beer products nationwide and boosted by implementation of new campaigns and consumer and trade programs that further strengthened the equity of SMB brands.

Globe Telecom, Inc. ended the first half of 2018 with consolidated service revenues of P67.3 billion with revenues hitting P33.2 billion in the second quarter, up 3 per cent from prior quarter.

Sustained topline performance was due to the continued expansion of the 4G and LTE network, and the growing preference of customers towards content-rich offerings and multimedia applications that enrich the Filipino digital lifestyle.

Mobile revenues reached P51.3 billion for the first six months of the year with mobile data still growing at a steady pace.

Globe’s mobile subscriber base totaled 65.1 million as of end-June 2018, up 9 per cent from the 59.7 million subscribers in the same period last year. From a product perspective, mobile data, the top contributor to the Company’s total mobile revenues, now accounts for 48 per cent from 42 per cent a year ago.

Mobile data service revenues generated a total of P24.7 billion in the first half of the year as video viewing continues to drive the high mobile data consumption (39% increase from 280 petabytes last year to 390 petabytes this period).

Mobile SMS and mobile voice revenues, on the other hand, posted P11.2 billion and P15.3 billion, respectively. On a quarterly basis, mobile service revenues stood at P26.1 billion or up 2% from the prior quarter.