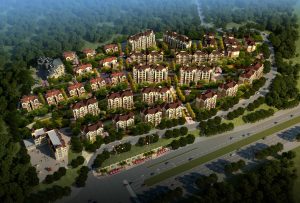 Marking a significant move that will boost its residential pipeline in China by over 2,100 units, Singapore’s CapitaLand has acquired all the shares in a company that owns a 32-hectare prime mixed-use site in Chongqing – gateway to China’s fast-growing western region.

The sprawling land parcel comprises two greenfield sites that will yield 1,900 residential units and a shopping mall with a combined gross floor area (GFA), excluding car park, of 335,000 square metres (sq m) when fully developed by 2022; as well as brownfield sites with an inventory of 223 residential units and 100,000 sq m of office and retail space that are completed or soon-to-be-completed.

The land parcel is located in Xinpaifang, a mature residential and commercial zone in Liangjiang New Area, the first national-level development area in inland China and a part of Chongqing’s Free Trade Zone.

It is a mere 20-minute drive from Jiangbei International Airport and a short distance from Guanyinqiao Central Business District (CBD) as well as Jiefangbei CBD, which is next to Raffles City Chongqing.

Surrounded by high-end residential developments and government offices and near parks, schools, medical facilities and shopping malls, the land parcel is part of a well-established residential area with a high-income population of about 600,000 people within a three-kilometre radius.

“Given its significant scale, strategic location and excellent connectivity, the land parcel in Chongqing’s Xinpaifang is a prized acquisition that will boost CapitaLand’s land bank in a key gateway city in the South Western region of China,” Lim Ming Yan, President & Group CEO of CapitaLand Group, said.

Lucas Loh, CEO of CapitaLand China, said: “Chongqing is one of China’s fastest growing cities with strong investment potential. The city’s growing population and rising income per capita have generated demand not only for residential properties but also premium retail and office spaces in central locations”.

“This acquisition is also timely, and we expect to recognise gains from sales of the soon-to-be-completed residential units upon handover, which could be as early as the
second half of this year,” Loh added.