The 2022 IMSA WeatherTech SportsCar Championship is set to get underway with one of the most historic races of the calendar. The 2022 Rolex 24 at Daytona will mark the 60th running of the 24-hour endurance classic at Daytona International Speedway to be held on 29th and 30th January. Motul will be powering the efforts of 2 teams, Pfaff Motorsports and BMW M Team RLL with their range of high-performance racing-grade lubricants, in the newly introduced GT Daytona Pro (GTD Pro) category. 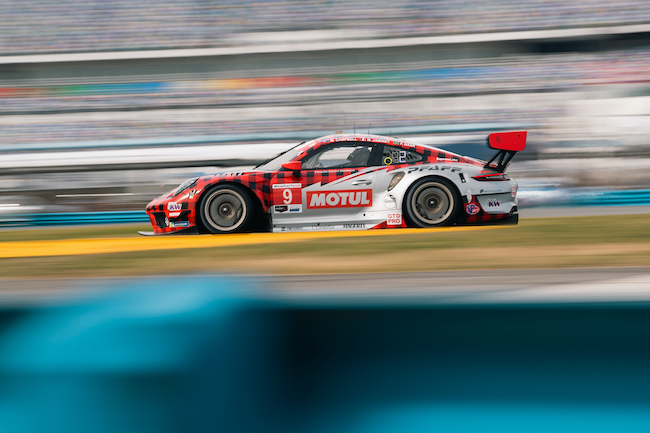 The 2022 IMSA WeatherTech SportsCar Championship is set to get underway with one of the most historic races of the calendar. The 2022 Rolex 24 at Daytona will mark the 60th running of the 24-hour endurance classic at Daytona International Speedway to be held on 29th and 30th January. Motul will be powering the efforts of 2 teams, Pfaff Motorsports and BMW M Team RLL with their range of high-performance racing-grade lubricants, in the newly introduced GT Daytona Pro (GTD Pro) category.

Pfaff Motorsports secured the GTD Championship in 2021 after a dominant performance. Motul’s collaboration with the team began in 2020 and has been a fruitful one on and off the track. The #9 Motul Porsche 911 GT3 R concluded the previous season with 6 podiums and 4 unmatched class victories. They will be returning with the familiar “Plaid Porsche” livery and a brand new driver line-up featuring Porsche works drivers Matt Campbell (AUS) and Mathieu Jaminet (FRA) for the full season, along with 2-time IMSA DPi champion Felipe Nasr (BRA) for the seasons’ four endurance rounds. Pfaff Motorsports continues to place its trust in Motul lubricants for the 2022 season too.

Motul is also a long time partner of BMW M Team RLL, which will also be making its GTD Pro class debut at this event with the new and highly anticipated BMW M4 GT3. In 2021, BMW bid farewell to the M8 GTE at Petit Le Mans, which was racing in the now-defunct GT Le Mans class. Starting this season, the BMW team will be competing in the GTD Pro class with their refreshed 2-car line-up, the #24 Motul BMW M4 GT3 and #25 Motul BMW M4 GT3. The #24 will be driven by Philipp Eng (AUT), Marco Wittmann (DEU), Nick Yelloly (GBR) and Sheldon van der Linde (ZAF) whilst the #25 car will be piloted by Connor De Phillippi (USA), John Edwards (USA), Augusto Farfus (BRA) and Jesse Krohn (FIN). 6 of the 8 drivers racing at Daytona also contested in the M8 GTE last year, with the other 2 having plenty of previous experience in the series. Both teams look strong going into the season opener, which is gearing up to be an exciting race weekend.

Motul became the “Official Motor Oil” of the IMSA SportsCar Championship in 2018 to support the top teams on the grid with the highest quality of synthetic lubricants. Their proprietary 300V along with RBF 700 brake fluid and other critical lubricants are vital in a championship series that features a mix of long and short races. Motul is a major part of the series, being title sponsor for Motul Petit Le Mans along with established partnerships across seven venues and events on the calendar. The Rolex 24 at Daytona is guaranteed to showcase thrilling multi-class racing action as the teams gear up to tackle the constantly changing conditions. The round the clock race also presents Motul with the opportunity to understand how their products perform in different machinery and constantly improve formulation to bring similar performance to everyday customers.

Motul is a world-class French company specialised in the formulation, production and distribution of high-tech engine lubricants (two-wheelers, cars and other vehicles) as well as lubricants for industry via its Motul Tech activity. Motul offers a whole range of products for everyday car use, including the 8100, H-tech, RBF series, ATF, CVTF and DCTF among others. Motul products ensure all parts of the car are kept in pristine condition to extract maximum performance and reliability.

Unanimously recognised for more than 150 years for the quality of its products, innovation capacity and involvement in the field of competition, Motul is also recognised as a specialist in synthetic lubricants. As early as 1971, Motul was the first lubricant manufacturer to pioneer the formulation of a 100% synthetic lubricant, issued from the aeronautical industry, making use of esters technology: 300V lubricant. In 2021, Motul launched the newest iteration of the 300V with revolutionary technology, setting a new benchmark for high-performance lubricants.

Motul is a partner to many manufacturers and racing teams in order to further their technological development in motorsports. It has invested in many international competitions as an official supplier for several championship winning racing teams.

Motul is committed to its growing business presence in Asia Pacific. Over the years, the company has expanded operations significantly. Currently it has 3 major manufacturing facilities and 2 R&D centres across the region to cater to the ever-growing demand. These centres focus on refining the lubricant technology for Asian climate and driving conditions, which are vastly different from Europe.