1982 Ventures, a leading early-stage venture capital firm in Southeast Asia, has announced the initial close of its first seed stage venture fund with US$12.5 million in committed capital. The fund is targeting to raise a total corpus of US$15 million. 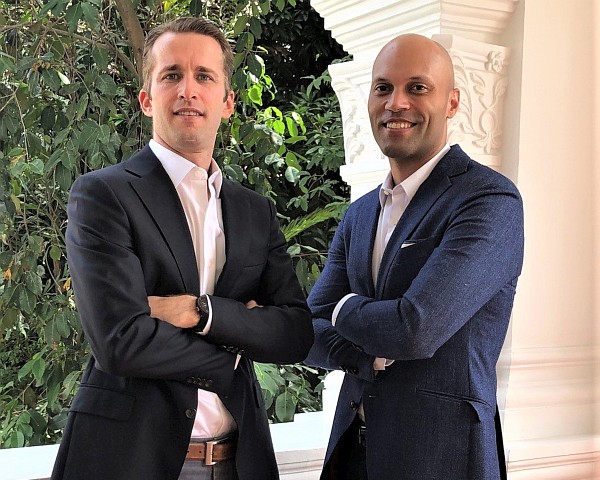 Scott Krivokopich and Herston Elton Powers, Managing Partners of 1982 Ventures, Southeast Asia’s leading seed fund which is focused on fintech. (1982 Ventures)
Established in early 2020, 1982 Ventures is a Southeast Asia focused venture capital fund that invests in seed stage fintech startups in Southeast Asia. The fund was recently identified as the most active Southeast Asia based fintech investor of 2021 (UOB).

Herston Elton Powers, Co-founder and Managing Partner of 1982 Ventures stated, “Seed stage fintech in Southeast Asia is a clear once in a generation opportunity. Our focus and credibility with founders make us first money invested and the partner of choice for fintech entrepreneurs in the region.” He continued, “Our investors have access to the highest quality deal flow and as a result of their commitment to 1982 Ventures, have directly participated in the region’s most competitive fintech rounds.”
JunYuan Tan, Co-Founder and CEO, of Homebase (a 1982 Ventures portfolio company) stated “1982 Ventures was one of our earliest institutional investors. They have been super helpful even up till today. In fact, 1982 Ventures has by far made the most number of quality introductions to us, especially for lenders, and it’s not even close. 1982 Ventures’ investment is one of the best money we’ve ever taken.”

Southeast Asia represents a once in a generation opportunity with half a billion consumers waiting for financial services. The region is experiencing rapid urbanization and has some of the world’s highest technology adoption and mobile and internet penetration rates. Southeast Asian fintech startups represent more than US$10 billion in unrealized value, with 100 projected fintech exits in the coming years (Dealroom).

Ian Sulaiman, Vice President, of Trihill, stated “1982 Ventures is filling a critical gap in the VC market with their focus on seed stage fintech companies. The GPs understand how to invest in Indonesia and across the region. Scott and Herston have impressed us with their company selection and we have confidence in the judgement.”

Going forward, the firm is looking to invest in a total of 30 start-ups primarily in the fintech sector across Southeast Asia. The firm has a core focus on Indonesia, Vietnam, Singapore and Philippines with the ability invest across the region and opportunistically in Pakistan and Bangladesh.

Scott Krivokopich, Co-Founder and Managing Partner of 1982 Ventures stated, “We are on track to realize our goal of becoming the best performing fund in the region and we are encouraged by the support from the global investment community in backing 1982 Ventures.” He continued, “We have seen the incredible rise of fintech in China, India, Latin America, Africa and the West — now is the time for Southeast Asian fintech to lead the way.”

Both Herston and Scott are former executives of tryb Group, a Southeast Asian fintech investor, and have each been in Asia for well over a decade. Scott Krivokopich was previously the Head of Investments at tryb Group and prior to that established Moore Stephens Corporate Finance business in China, advised on M&A for Southeast Asian fintech transactions, worked with Micro-Finance pioneer Grameen Bank. Scott started his career in New York working for PwC Structured Credit and Derivatives Advisory.

Herston Elton Powers, an INSEAD graduate in Singapore, previously led investments, operations and investor relations at tryb Group. He is credited as the first institutional investor in Indonesia’s leading fintech and Neo bank Alami. Prior to becoming a VC investor, Herston was a banker at the Bank of New York Mellon (BNY Mellon) in New York, Hong Kong and Singapore where he was Head of Southeast Asia and worked on numerous Chinese, Indian and Southeast Asian listings on NYSE and Nasdaq. He also supported the founding of a global fintech company based in Europe.

“1982 Ventures has proven its ability to source and invest in the best fintech start-ups in the region.” stated Scott Krivokopich. He continued, “Our mission is clear to back the next generation of unicorns which will come from the fintech sector in Southeast Asia.”

1982 Ventures expects to announce the final close of its first seed fund soon and is only open for investment from strategic investors to participate in a “greenshoe option” as the fund is already oversubscribed ahead of its final close.

Quotes From Investors And Portfolio Companies Of 1982 Ventures (In Alphabetical Order):

Carta:
Davis Thacker, Director and Head of Carta Ventures, of Carta stated “Southeast Asia is a new and critical market for Carta. 1982 Ventures is a strategic investment for Carta and the perfect partner as we look to expand our fintech partnerships in the region.

First Close Partners:
Carolina Huaranca Mendoza, General Partner of First Close Partners, stated “Our firm is always on the lookout for best in class fund managers from underrepresented backgrounds across the globe. Herston and Scott have built an impressive firm with a strong vertical focus in fintech in Southeast Asia which really stood out to us. We are proud to be investors and tremendously excited to follow their progress as they continue to build their venture franchise. Our hope is that more underrepresented fund managers follow 1982’s lead and are inspired to invest in emerging markets.”

Gavin Tan of Brick:
Gavin Tan, Co-Founder and CEO, of Brick stated “1982 Ventures led our first VC round and Brick has been incredibly fortunate to have an investor that lives and breathes fintech and is always ready to support us with investor, customer and talent introductions.”

James Vuong of Infina (YC S21):
James Vuong, Founder and CEO, of Infina stated “On our first call it was clear that Herston and Scott understood our business model and what we are building at Infina. For a solo founder it is invaluable to have a team you can call for anything, has real experience and expertise, and likes to move fast and get things done.” He continued, “Even after our successive fund raising rounds they continued to support Infina by identifying and helping us recruit our Chief of Staff!”

JunYuan Tan of Homebase (YC W21):
JunYuan Tan, Co-Founder and CEO, of Homebase stated “1982 Ventures was one of our earliest institutional investors. They have been super helpful even up till today. In fact, 1982 Ventures has by far made the most number of quality introductions to us, especially for lenders, and it’s not even close. 1982 Ventures’ investment is one of the best money we’ve ever taken.”

Trihill Capital:
Ian Sulaiman, Vice President, of Trihill, stated “1982 Ventures is filling a critical gap in the VC market with their focus on seed stage fintech companies. The GPs understand how to invest in Indonesia and across the region. Scott and Herston have impressed us with their company selection and we have confidence in their judgement.”