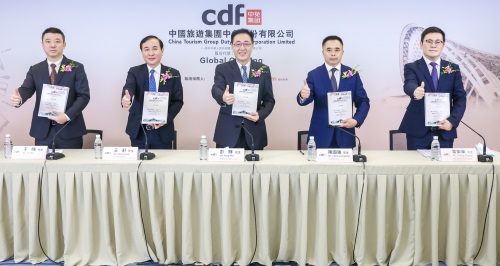 At the press conference, the representative of the Company’s sponsors provided an overview of the global offering to the media. CTG DUTY-FREE plans to issue approximately 103 million H Shares under the stock code of 1880.HK. The offer price range is HK$143.5 to HK$165.5 per H Share, and the offering starts on August 15, 2022.

The management of CTG DUTY-FREE stated that to consolidate its leading position as the world’s largest travel retail operator, the Company will continue to build competitive barriers in its existing business and maintain its industry leadership through ongoing efforts to develop offshore duty-free business, expand traditional retail channels in China, and further develop high-quality duty-paid merchandise sales. The Company will actively expand new business and explore more profit growth opportunities, such as building more integrated travel retail complexes, opening downtown duty-free stores ahead of competitors, and exploring overseas channels. The Company will also reinforce its competitive advantages by deepening the relationship with upstream suppliers and domestic and overseas channels through the capital operation. For example, it will expand the upstream supply chain through direct cooperation with upstream brands or direct investment while seeking acquisition opportunities in domestic and overseas markets. The Company will further strengthen its core capabilities, including operation management, procurement capability, supply chain management (logistics and distribution system), information system management and digitalization and marketing capabilities to achieve continuous development. In addition, the Company will attract and retain top-notch strategic talents to preserve corporate human resources.

Concerning the H-share offering, the Company’s management also responded to the concerns of the media and investors.

Regarding the possible positive influences of listing in Hong Kong, the management indicated that globalization is one of the key strategic goals for the Company’s long-term development. Hong Kong features an open and mature capital market, which international investors have widely recognized for many years. The listing in Hong Kong will bring three benefits to the Company. First, it will help further enhance the Company’s brand influence and visibility in the international market and support the Company in consolidating its leadership as a global travel retail operator. Second, it will facilitate the Company’s construction on both domestic and overseas financing platforms and promote its further development with support from domestic and overseas capitals. Third, it will build up the Company’s capital barriers and enables the Company to allocate more funding to the construction of projects such as Haikou International Duty Free Complex, Site II, Phase I of Sanya International Duty Free Complex, and downtown duty free stores. Fourth, it will promote the Company’s globalization and continuous expansion of overseas business.

Regarding whether CTG DUTY-FREE will open stores in travel destinations for Chinese consumers, the Company mentioned that since its establishment in 1984, it had expanded its business operation around the changing consumer patterns and needs. An increasing number of Chinese people are travelling abroad, and Chinese tourists have become a significant consumer group in the global duty free and travel retail industry. Previously, the Company opened and operated nine overseas duty free stores following the footprints of Chinese tourists, all of which have achieved good results. Next, the Company will continue to open stores in popular destinations among Chinese travelers, its major consumer group, to enhance the Company’s performance and generate better investment returns for shareholders.

Concerning the impact of the recent COVID-19 pandemic in Hainan province on CTG DUTY-FREE, the Company commented that the influence was only an effect and will not have a more significant effect on the Company’s operation in the mid to long term. From 2021 and March to May 2022, Hainan and Shanghai have suffered from COVID-19 resurgence one after another. In the face of challenges, the Company made comprehensive efforts offline and online to ensure a stable business operation. Specifically, the overall passenger foot traffic in Hainan Province in 2021 was only 97.4% of the pre-pandemic level. Still, the Company generated revenue of RMB47.1 billion in Hainan, 3.5 times the corresponding revenue in 2019. In addition, from March to May 2022, the Company’s operations were impacted by the epidemic to a certain extent, but the Company’s operations have recovered rapidly since late May. Since June, the Company’s monthly sales have improved significantly, and the revenue in June increased 13% year-on-year. Moreover, in the first half of 2022, the gross margin of the Company’s core business improved by 5.5 percentage points compared with the second half of 2021 and remained stable. Looking ahead to the second half of this year and afterward, the Company is expected to successfully launch several new projects, including Haikou International Duty Free Complex and Site II, Phase I of Sanya International Duty Free Complex, which will assist the Company’s business expansion. Moreover, for the mid and long term, the Company has already made a full deployment in downtown stores and port stores, which will also contribute to the Company’s revenue growth in the future.

The Hong Kong Public Offering was closed at noon on 18 August 2022. It is said that the Hong Kong Public Offering has been fully applied, and the reactions from both retail investors and margin are positive. It is also said that the Company’s international placing was fully covered within an hour after the opening of the book building last Friday. Prior to that, best-known international and Chinese institutions have actively placed orders to participate in the Company’s global offering of H shares. The information said a high multiple order coverage was achieved within two days.