At 9:00 am on January 8, 2022, Weichai Power (Stock codes: 2338.HK; 000338.SZ) released the world’s first diesel engine with a base engine thermal efficiency of 51.09% and major achievements in hydrogen technology achievements. 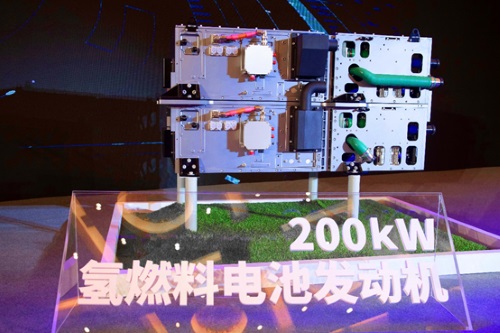 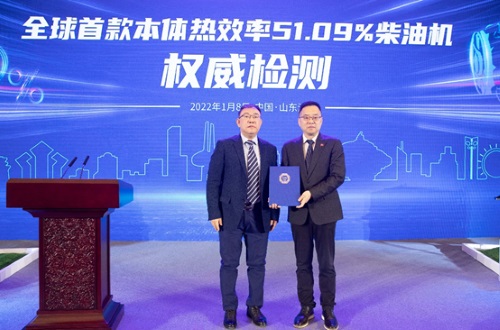 Tan Xuguang, CPC Secretary and Chairman of Shandong Heavy Industry Group, Chairman of Weichai Power and Director of the Academic Committee of the National Fuel Cell Technology Innovation Center, reported the research findings of the world’s first diesel engine with a base engine thermal efficiency of 51.09% developed by Weichai Power, the operation of the National Fuel Cell Technology Innovation Center and the “Hydrogen for Every Home” technology demonstration project. TuV SuD, an world-renowned test authority, issued a certificate of thermal efficiency of 51.09% to Weichai Power. Then the delivery ceremony of hydrogen-powered heavy-duty truck delivery for demonstrative operation between Shandong Heavy Industry and Shandong Port was held.

Challenging Limits, Scaling New Heights
Today when green and low carbon development has become a global consensus, China has set the strategic goal of achieving carbon peak by 2030 and carbon neutralization by 2060. Transportation is an important field for this target, and the internal combustion engine industry plays an important role in this process.

The base engine thermal efficiency of 51.09% is another significant revolution of traditional engines, as well as a technical preparation for the implementation of the “China VII” emission standard. The application of this technology will help Weichai Power lead the world in a full spectrum of diesel engines, be of great strategic significance to promoting the energy-efficient and green development of China’s traditional internal combustion engine industry, and play a significant leading role in the global internal combustion engine industry.

According to estimation, compared with existing key products (diesel engines with thermal efficiency of 46%) on the market, those with a thermal efficiency of 51% can lead to a reduction of 10% in fuel consumption and carbon dioxide emissions alike, saving fuel consumption by 16 million tons and costs by approximately 140 billion yuan annually, and reducing carbon dioxide emissions by 50 million tons annually. With the massive use of the top technology in the industry, it will generate huge economic and social benefits.

In 2021, the National Hydrogen Cell Technology Innovation Center, the only of its kind in China, was established under the initiative of Weichai Power. Meanwhile, the Ministry of Science and Technology (MOST) and Shandong entered into a framework agreement on the “Hydrogen for Every Home” technology demonstration project. Based on the center, the ministry has carried out multi-scenario demonstrative application of hydrogen energy in Shandong, and sped up breakthroughs in key hydrogen technologies and the development of the hydrogen industry, thereby creating a duplicable Shandong sample for the hydrogen industry.

Since the launch of the “Hydrogen for Every Home” technology demonstration project, with the strong support of MOST and Shandong, the National Hydrogen Cell Technology Innovation Center has established an innovation consortium centered on Weichai Power and constituted by enterprises, universities and research institutes, to accelerate technical breakthroughs and industrialization, and successfully develop 15-200kW hydrogen fuel cell systems. The company’s 200kW fuel cell systems were selected for the National Exhibition on Sci-tech Achievements in the “13th Five-Year” Period in October 2021. The company was the first to conduct an environmental adaptability test of fuel cell vehicles in extreme cold, achieving one-time successful start-up at a temperature of 34 degrees Celsius below zero. The company was the first in the industry to turn out products lasting 30,000 hours, pioneering the industrialization of Chinese fuel cells.

Tan said the base engine thermal efficiency of the internal combustion engines being up to 51.09%, massive application of new energy in products, and the “dual driving force” strategy, have kept Weichai Power ahead in the development of traditional high-end engines and new energy engines, and opened up a new path for diversified energy transformation under the national strategy of carbon peak and carbon neutralization.