A group of consultants based in Azabu Juban have been following the coronavirus, spread, and response around the world. We have been tracking mask usage in Tokyo over the last months and readers had asked us to update these. In addition we wanted to take a look at global responses to the coronavirus pandemic to find keys for moving forwards.

[Image #1] European/Asian Countries by Cases and Deaths Per Population (April 21, 2020) 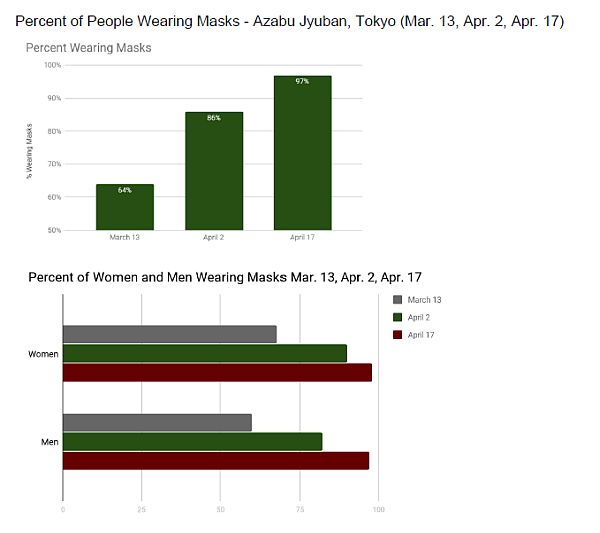 Even as cases have grown in Japan and Singapore, we find it remarkable how well Asia has fared and how effective their measures have been overall, taken in a global context. In this piece, we will therefore update mask usage numbers, compare global outbreak statistics, and look at some of the measures large and small that seem to have been effective in Asian countries so far.

As one reader commented, “we may need to start to think of dealing with the coronavirus not as a sprint, but as a marathon.” In this light we find it instructive to look back at some of the successes Asia countries have had, so far.

As people stay focused on their own country they often forget that in a wider perspective solutions have been very helpful. As shown in the table, countries like Taiwan, Korea and Japan have been able to keep death rates much lower than those of Italy, Spain, and the United States. Death rates in the Asian countries come in at less .5 per 100,000, whereas in many European countries they are more than one hundred times that amount.

[Image #1] European/Asian Countries by Cases and Deaths Per Population (April 21, 2020)

Masks in Tokyo Up Thirteen Percent

As the Japanese government and citizens get ever more vigilant about controlling the coronavirus, we have found that mask wearing has become ubiquitous in Japan. We updated our survey for a third time, on April 17th. This time we found ninety-seven percent of people wearing masks.

This is up from eighty-six percent on April 2nd (thirteen days ago), and sixty-four percent March 13 (thirty-five days ago), an increase of thirteen percent.

In this survey, again, women were more likely to wear masks, though only barely. Ninety-eight percent of women wore masks and ninety-seven percent of men wore them. See the charts below for the changes over time.

In addition we found the more proactive approach towards beating the virus to have had a significant effect on ridership as well. Said a Sawayaka Shinyou Kinkou bank employee who commutes daily, “oh there are definitely less people; now people even open a seat next to each other on the train, rather than crowding in like they used to.” Our data backed up her inference, with ridership down forty-nine percent on April 17th compared to April 2nd.

[Image #3] Decrease in Ridership from April 2 to April 17, Azabu Jyuban

NOTE: All data collected at identical times during a ninety minute period during rush hour. All days were clear, temperate days. Average temperatures on the three days were 14, 15 and 12 degrees celsius and 57, 59, and 54 degrees fahrenheit. The temperature came down slightly.

Getting Ready for the Long Haul – Asia Strategies Working

Following along with the goal of thinking of coronavirus as a marathon, we wanted to look for other examples of success in containing the virus that might be applicable to other countries in Asia or the West.

We find the successes in Taiwan, Japan, Singapore, China, South Korea, and Thailand to be frankly. All of these countries have kept death numbers very low compared to western countries. They have done this largely while still keeping at least a portion of the population at work and pushing the economies forwards.

We have identified important learnings from each country:

1. It quarantined Wuhan from the rest of China on January 23rd, just before Chinese New Year, China’s largest holiday period for both in-country and international travel. This allowed it to largely contain the spread and it allowed them to provide more healthcare workers and supplies to Wuhan.

2. As a part of this exercise, it also forced an internal quarantine in Hubei, shutting down non-essential businesses and locked down 11 million people in Wuhan and (the following day) more than 57 million people in other cities.

3. Third, it built two coronavirus hospitals (February 3rd). This led to a rapid drop off in deaths from the worst day of 150 deaths on February 23rd level down to less than 10 per day in only 19 days. We find these last hospitals to have been very important given the amount of in-hospital spread previously noted. In one study 42% of cases in Wuhan had previously been spread within the hospital.

We found that the coronavirus only hospitals that were built were truly amazing. However, subsequently in the UK a 4,000 bed hospital was built in the ExCeL Center in nine days and The United States’s Corp of Army Engineers created seventeen hospitals with 15,500 beds in about a week. We believe that building these hospitals was so important because it has become clear that up to forty percent of spread has typically been inside hospitals and this is killing many at risk people.

Taiwan has perhaps been the most successful, with only 422 cases and just 6 deaths. It was the most proactive, testing people for temperature on flights before it had even had a one case recorded.

It was also very proactive with other measures. For instance on January 29 the Taiwan Premier took steps to guarantee the supply of masks including releasing 23 million mask into the market and banning their export. By April 1st, Taiwan’s successful measures led to them approaching their target of producing 15 million masks daily and announced it was donating 10 million masks to health workers outside of Taiwan.

The masks seem to have shown their efficacy again. We think it is a combination of catching some droplets, while also keeping people vigilant about isolating as much as possible even while in public. The relative success of Taiwan has been so high that they were able to open Taiwan baseball (albeit with no fans) a week ago.

South Korea, as most know, took to mass testing and a number high tech tracking measures so as to track the one major cluster that emanated out from an outbreak in a church in Daegu.

More than seven-thousand cases were confirmed in less than three weeks, but the death rate remained low.

Their attention to tracking and quarantining people affected by an outbreak was successful in controlling the spread with only .5 deaths per 100,000 population as of the writing of this article.

Despite its proximity to China and role as international transit hub, Hong Kong has successfully minimized its coronavirus impact with 1,026 confirmed cases and just 4 deaths. It acted quickly in late January to shut a number of border crossings, significantly reducing travel to and from China and implementing work from home orders. It has since tightened travel restrictions and shut schools.

Singapore immediately set up a multi-ministerial committee on January 24th, the day after the first confirmed case, to manage the pandemic.

Japan has seen a spike in cases and deaths recently and has been criticized for low numbers of tests. However, like Singapore Japan has maintained death rates at .2 per 100,000 people. Again, this is compared to European countries such as Spain with 45 per 100,000 people (225 times the number on a per person basis). Many of its measures have proven effective so far, including:
1. Publicizing the most dangerous outbreak areas
2. Carefully tracking early clusters
3. Keeping coronavirus patients largely out of hospitals and nursing homes
4. Setting targets for reduction interactions (now set at eighty percent).

From the get go Japanese media daily reported the exact places where outbreaks were occurring: first taxi cabs, then karaoke bars, then live music events. These gave the populous clues of where to avoid and eventually a focus for what activities to shut down first. The Japanese citizens were largely attuned to understanding these dangerous activites and taking responsibility to avoid them as much as possible. Later the government was able to successfully “request” that many of these venues temporarily shut down. Again, with no law enforcement capability they achieved the limitations with the cooperation of business owners.

Secondly, Japan effectively kept coronavirus cases away from hospitals. As Azabu Insights has noted before, this is very important because seventy-three percent of people in hospitals are over age sixty-five and very vulnerable.

Lastly, their targeting of a specific target for reduction of interactions has significantly slowed the spread. Japan showed, as had Taiwan and Korea that a semblance of work can continue while still drastically slowing the spread of the disease.

The Effect of BCG Vaccination

Beyond the proactive nature of the Asian communities with masks, hand washing, polite social distancing, school closure and the like, we think that many parts of Asia have likely benefited from the protection of the BCG Vaccines. The BCG Vaccine, which was intended to protect from Tuberculosis seems to have some protectiveness against coronavirus.

The BCG vaccine has been used extensively in Japan, South Korea, Thailand, Taiwan, Singapore, and Hong Kong. It is not used in countries such as Italy, Spain, and the United States, which have had some of the worst outbreaks.

Hopes and Recommendations for the Future

For round one of the coronavirus outbreak, many of the Asian countries have fared very well compared to other parts of the world. But coronavirus may well be a marathon and not a sprint.

We hope and recommend that they will adopt the following policies going forwards:

1. Continue to keep testing in locations separate from hospitals to keep the virus from spreading in hospitals.
2. Build multiple 2-4,000 bed “coronavirus only” hospitals, staffed by young, low-risk doctors and nurses. This will allow the healthcare system to continue to treat the rest of society well.
3. Increase testing at targeted areas, including all people that enter an aged care facility (some twenty percent of deaths in USA are at aged care facilities)
4. Involve the military/self defense forces in helping to create hospital capacity and to safely transport coronavirus patients
5. Adopt the new secure outbreak tracking technologies offered by some of the tech companies that can allow us to track clusters even as populations grow. This will allow us to track clusters effectively.
6. Continue to be strategic in keeping the right things closed and targeting a reduced number of interactions. This necessarily requires finding funding to support small businesses.
7. Move to vaccinate more populations with BCG, including non-Japanese who request them.
8. We hope that individuals will remain vigilant as we wait for more good news about treatments and a potential vaccination. Wearing masks has some effect, making the move to more indoor home activities helps even more.

As Europe and America take baby steps towards loosening stay at home orders, we hope they will also learn from some of the relative successes of the Asian countries mentioned above. Of course as we continue on this journey, Asia probably has lessons to learn from the USA and Europe as well.

We would like to hear your opinions at info@azabuinsights.com