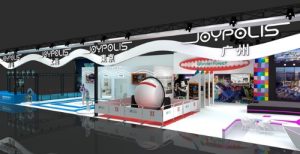 China Animation Characters Company Limited (“China Animation” or “the Group”; stock code: 1566), a leading multimedia animation enterprise in the PRC, today hosted the grand opening of “the Second China Animation Cup – 5G+VR National Electronic Sports Tournament” in the Eleventh Shenzhen Cartoon and Animation Festival. Moreover, this year, the Group jointly organized “5G+VR eSports” exhibition with Shenzhen Media Group (“SZMG”), and to adopt 5G technology for VR eSports Tournament live streaming. Strategic partners such as Huawei and China Unicom and more will be joining the exhibition to bring an all-rounded enjoyment to the players and audiences. 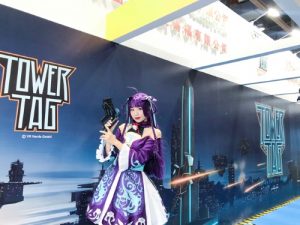 Adoption of Advanced Edition of “Tower Tag” to Enhance Sensory Experience of the VR eSports Tournament
“The Second China Animation Cup – 5G+VR National Electronic Sports Tournament” organized by China Animation, has chosen multi-players VR eSports shooting game “Tower Tag” as the game event and game show for the exhibition. The game is developed by the champion team from Germany and it is the first multi-players VR game in the world.

The first Tournament has been held in Animation-Comic-Game Hong Kong and quickly gained attention from the eSports industry. The advanced edition of “Tower Tag” displayed this year has made obvious improvements on the resolution and player experience. Three new maps and AI battle function has been added on the 3 vs 3 real player battle mode to improve the mobility and stimulation of the game.

International Team Practice Spots, 5G Technology Application on VR Tournament Live Streaming
30 teams have registered to take part in the tournament this year. A winner’s cheque of RMB50,000 will be awarded to the Champion team. Moreover, the Group has set up “The Best Dressed Team” and “The Best Team Spirit Team” to thank for the involvement and support of the participants. The Group has set several practice spots in Tokyo, Shanghai, Hong Kong and Shenzhen for training before competition. Top 16 who have passed the audition will be fighting for the championship from 18 to 21 July (Thu-Sat) in the Shenzhen Cartoon and Animation Festival.

The stage of the tournament has used “Ice Team” and “Fire Team” as design theme which enhance the visual effect of the stage and the tournament will be directed by the famous director of Shenzhen Media Group who was also the director of Chinese New Year Gala. Moreover, the tournament this year firstly adopts 5G technology equipped with high resolution, high speed and almost no time delay, to do the first-ever live streaming via mainstream media in the Guangdong-Hong Kong-Macau Greater Bay Area such as QQ Live Streaming, Shenzhen Satellite TV, Macau Asia Satellite Television (MasTV) and more.

Experiences the Fascinating China Animation’s red VR eSports onsite
The Exhibition also displayed the Group’s owned VR game “Huang Yangjie Battle” which launched in September 2018. The background of this game is based on the history of one of the important battles of the PRC, and was the only VR game awarded two prestigious industry awards named “Chinese Information Consumption Innovation award 2018” and “Gold Award of Chinese eSports Innovative Software 2019” presented by China Information Industry Trade Association. The game will be launched in the cities of Jinggangshan, Shaoshan and Yan’an.

Develops National Animation Base and Achieves 5G+VR O2O Dual Track Strategy
Being the first multimedia animation enterprise in China to list on the Main Board in Hong Kong, the Group demonstrated the soft power of China Animation in the Cartoon and Animation Festival and enhanced the cooperation with the strategic partners. In the future, the Group will cooperate with SZMG and other industry leaders to develop “the Eight Major Projects” in the Shenzhen Yijing National Cartoon and Animation Industry Base, including introducing the cutting-edge industry leaders and a complete industry chain, VR eSports Interactive Experience Center, International Animation Museum, Global Animation Experience Center, World-class Children Amusement Park, Teens Activity Center, Public Technology Service Platform as well as incubators for the companies in the cultural and creative industry. The Group will continue to develop the new industry as the first mover to upgrade the Group’s VR eSports game. The Group will adopt 5G technology in its dual online and offline strategy and implement its IP into VR eSports to draw market attention of the IP characters, and generate synergies with the animation-derived product business.

As for CA SEGA JOYPOLIS, thanks to the two international brand endorsements “China Animation”, and “CA SEGA JOYPOLIS”, which was acquired in 2017, the Group collaborated with property developers in the PRC and government officials to introduce JOYPOLIS and family amusement park Wonder Forest to the developers’ and government officials’ projects focusing the Guangdong-Hong Kong-Macau Bay Area and some of the red tourism cultural area. Currently, the Group operates 3 CA SEGA JOYPOLIS in Shanghai, Qingdao and Tokyo Japan, respectively. And the licensing business of Wonder Forest covers first-tier and second-tier cities in the PRC.

China Animation also owns many famous animation IP, including two top 10 national cartoon characters – “Han Ba Gui” and “Violet,” as well as characters from movies and animated dramas such as “The King of Tibetan Antelope,” “Project Egg,” “Animal Conference on the Environment” and “Amazing UU.” China’s first virtual artist “Violet” created by the Group has held several 3D Holographic Concerts in Shenzhen and Hong Kong since 2015, and will hold her third concert by the end of 2019. The Group also enjoys close cooperative relationships with many world-leading IP brands such as “Transformers” in the US, SEGA Sonic the Hedgehog, Initial D, etc. The Group also participated as the second largest shareholder in the co-investment and co-production of the animated series “The Reflection” with international famous partners such as Studio Deen from Japan, Stan Lee “Father of Marvel” which was broadcasted over 38 countries and regions.

NexBloc Adds .NEX and .ARTIST Decentralized Top-Level Domains to its Arsenal of Web 3.0...

Jones - May 19, 2022
0
NexBloc today announced the creation of several new decentralized top-level domains (dTLD) including .NEX and .ARTIST. This adds to the expanding list of domains...

Jones - May 18, 2022
0
The Government Blockchain Association (GBA) is pleased to announce that their Banking & Finance Working Group Leader, Dr. Sindhu Bhaskar, has been elevated to...

Deputy Directors from Kenyan Ministry of ICT and ICT Authority along with INTERPOL’s Director...

Jones - May 17, 2022
0
As the pursuit for a robust African cybersecurity landscape gathers momentum, Tradepass has taken the initiative to host the 4th edition CyFrica at The...

Jones - May 17, 2022
0
A consensus is emerging from multiple Davos insiders that the next wave of consolidation is about to hit the Crypto Markets as awareness of...
© All Rights Reserved EventsNewsAsia.com 2018