AdBug, the leading Chinese ad verification company, has uncovered the latest, and perhaps the largest, ad fraud operation and threat to China’s digital advertising market ever: RedEye. China’s largest fraudulent operation is diverting, according to latest AdBug estimates, an estimated US$3 million per day away from brand name advertisers, while over 100 brand advertisers have incurred losses from fraudulent RedEye ad impressions. Many more, with ads displayed in the wrong context or on unwanted websites, have sited varying damage to their ‘Brand’. 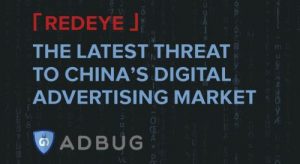 According to AdBug, the RedEye operation uses ‘traffic exchange platforms’, which generate huge amounts of fake traffic for publishers. By connecting different platforms, the RedEye network contains thousands of digital publishers (including top Chinese digital media platforms) and more than 300,000 URLs and apps, which are connected together in complex networks of up to 99 different nodes. Visiting a node generates traffic (and ad impressions) for other nodes in the network, giving members of the RedEye network access to a huge pool of fake traffic and lucrative ad impressions.

RedEye works by using iframes to embed ads in its network and generate fake impressions. It also connects a number of traffic exchanges into a single network to create a larger pool of users and generate exponential growth in fake traffic. When a page in the RedEye network is loaded, traffic is not necessarily generated by a human user – it may be non-human traffic generated by bots. Loading an iframe in the RedEye network automatically loads all the other layers and ads in the network, and non-human traffic can be used to create botnets.

Martin Zhang, Adbug CEO, says, “The growth of RedEye has been fueled by a number of factors, including a growing demand for fake traffic, the increasingly complex nature of the ad ecosystem, and a lack of technological advances to detect fraud. During our investigation, we’ve noticed that many of the ads in the RedEye network were accompanied by a fraud detection code from leading fraud detection firms. However, these codes usually failed to detect any unusual activity or traffic.

“The pixel tracking technology used by most Chinese measurement firms is unable to detect whether an ad is embedded in RedEye’s code. Meanwhile, the Chinese ad industry is often guilty of negligence – agencies, DSPs, SSPs and ad exchanges tend to turn a blind eye to fraudulent practices, as there are no incentives to monitor traffic.

“In addition, financial rebate partnerships between publishers and agencies create a lack of transparency, which is exacerbated by a general reluctance to involve fraud detection firms. There have even been instances of media agencies colluding with measurement firms and fabricating data in order to solicit new business. This has had a detrimental impact on reputable fraud detection firms that strive to uncover fraudulent practices.

“In spite of this,” says Zhang, “AdBug hopes to bring an end to the RedEye operation and its fraudulent practices.”