The statement was delivered by President Joko Widodo during the closing ceremony of the 40th and 41st ASEAN Summits and Related Summits at Sokha Hotel, Phnom Penh, Sunday, (Nov 13). 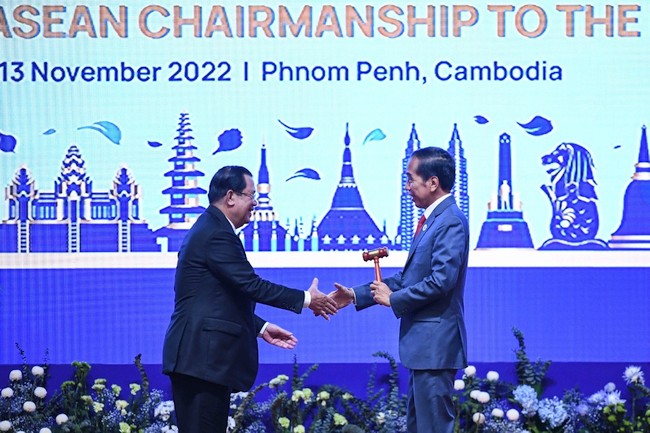 Prime Minister Hun Sen hands a gavel to Indonesian President Joko Widodo, a gesture symbolizing the handover of the ASEAN chairmanship on November 13, 2022

It is an honor for Indonesia to be the Chair of ASEAN in 2023, President Jokowi said.

According to Jokowi, ASEAN must be a stable and peaceful region, and an anchor for world stability.

The organization must also consistently enforce international law and not be a proxy for anyone, he said adding that ASEAN must be a dignified region, and uphold human values and democracy.

He noted that capacity building of ASEAN institutions must also be a concern in order to be able to answer the challenges of the next 20 years.

The President hopes that by 2045 ASEAN must be more adaptive, responsive, and competitive.

All of this must be fought for the ASEAN way, which is in line with the spirit of cooperation and the full implementation of the ASEAN Charter.

The President invited all ASEAN leaders to attend the ASEAN Summit in Indonesia next year.

With this premise, the chairmanship of Indonesia will take the theme ASEAN Matters: Epicentrum of Growth.

The Foreign Minister said ASEAN has three pillars of cooperation namely the political- security pillar, the economic pillar, and the sociocultural pillar.

During the chairmanship, the handling of the political-security pillars will be coordinated by the Coordinating Minister for Political, Legal and Security Affairs and the Minister for Foreign Affairs.

Next year, the first activity will be a Foreign Ministers Meeting in the form of a retreat which will be held in January.

The new ASEAN Secretariat building has adequate meeting rooms and is very suitable to be used for ASEAN meetings.

Hylobiz Launches its Business in Indonesia in Partnership with Accurate and Brankas, Empowers M/SMEs...

Jones - February 3, 2023
0
The partnership of Hylobiz, a Vayana group company, with Accurate and Brankas would facilitate businesses in Indonesia with connected business software, especially accounting &...
© All Rights Reserved EventsNewsAsia.com 2018