Their gender itself is reason enough for much of the corporate world to be biased against women. However, working women face all kinds of subtle and overt biases as they navigate their way through their careers. From their age to choosing to be a mother, anything could be the basis of unconscious biases. The need to talk about, address and overcome such biases formed the basis of the discussion during the first virtual session of the Collective for Equality Summit on earlier on Thursday evening. 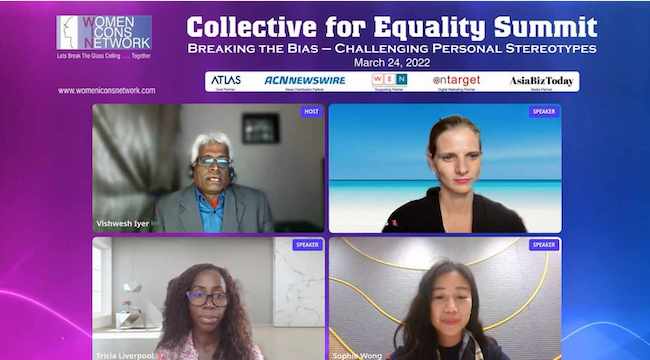 Hosted by Singapore-based Women Icons Network (WIN) to mark the International Women’s Day, the two-day summit aims to bring senior corporate leaders from Asia-Pacific on the same stage to discuss their personal experiences, the current state of the gender equality initiatives and the way forward. The topic for the first day was “Breaking The Bias – Challenging Personal Stereotypes”. The session was moderated by WIN founder director Vishwesh Iyer, and the panelists were Malayasia based strategy, innovation and leadership consultant Dr Marcella Lucas, head of corporate sales of Google Cloud for Singapore-Malaysia, Sophie Wong and general manager of Cornerstone Global Partners, Tricia Liverpool.

Welcoming the panelists and attendees, Vishwesh stressed the need to have such conversations all around the year, and not wait for International Women’s Day to have them. He asked Sophie about her experience with personal biases and stereotypes. She remembers that when she entered the tech industry a decade ago, the awareness or conversation regarding systemic prejudices or unconscious bias was non-existent. She remembers often being told to behave and dress older than her age to gain respect of clients and colleagues.

Through her career, she has worked with Fortune 500 companies in multiple domains. Over the years, she has seen the perspective of equality being at the core of an organisation develop. She is especially hopeful that the age-related biases are all but rooted out today, especially with so many startup founders being very young. Now, most organisations do not bring gender, age, religion, culture and other such factors during the hiring process.

For Marcella, the one bias she has had to fight in recent years has been to fight the perception that working out of a small village on the beach does not mean that she is “beach bumming”. In fact, fighting this bias has led her to put in more hours in work and be online throughout the workday. Employees who opt to work from home, especially women, are thought to give more attention to children and domestic responsibilities, even when they are equally productive Nas their other colleagues, she pointed out.

As companies move towards a hybrid work environment, the idea that remote or flexible working can be equally productive needs to be reinforced, she believes. The questions that needs to be answered here is whether people really want to go back to the offices, and what kind of support they need to transition from remote working to going back to offices.

Tricia feels that biases have followed her all her life. She recalls an incident where an Australian company she was working for asked not to wear a short skirt. She chose to resign the very same day. Being an expatriate for most of her career, most people thought she was a trailing partner even when she had a flourishing career. People have directly asked her how she would lead a team being an expatriate female, and a “soft” person.

As a recruitment specialist, she often comes across clients who give her a specific list of traits that they are looking for in new hires. They even give specifications like the nationality and age of the candidates. She has often discouraged putting talents under such boxes. She encourages them to have a real conversation with the candidates to assess their personality and behaviours, to match the right person to their organisation.

Several pertinent topics like maternity and paternity leaves, breaking personal biases, supporting working mothers, unconscious gender bias in scientific and industry data were also discussed during the summit. All panelists agreed that having such conversations more regularly would help each of us overcome our own personal biases.

The winners of the Women Icons Asia Awards 2022 were also announced on the occasion.

Women Icons Network has been inspiring women to break the glass ceiling for more than five years by engaging in a conversation with women leaders and achievers. Women Icons Summits have been organised annually in Singapore & Malaysia since 2017. The online platform www.WomenIconsNetwork.com is focussed on precipitating the move towards gender equal places of work across the region.

Women Icons Network aims to be the largest data aggregation and analysis platform across South & South East Asia integrating objective feedback from women and published data on companies to create a Diversity Metric that differentiates workplaces around Gender Equity.