Just 20 kilometers from the south of Kuching is a wildlife centre which acts as a semi-wild home to orangutans. Called the Semenggoh Wildlife Centre, it is the biggest orangutan rehabilitation centre in Sarawak. This centre is nestled in a larger natural forest called Semenggoh Nature Reserve. 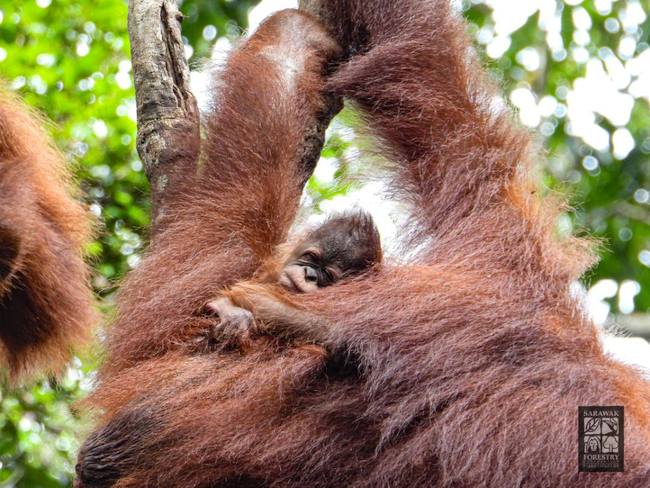 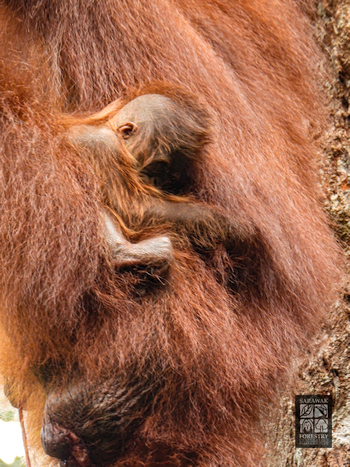 Recently, Semenggoh Nature Reserve proudly announced the birth of a baby orangutan, born between 22 – 23 January 2022. This is the fourth baby for Analisa who herself was born at the centre in 1996.

While the birth of a baby is always exciting news for the protection of orangutans, Semenggoh Nature Reserve has even more special news this year – the birth of two more orangutan babies, making three new orangutan additions in 2022 – a first for the centre.

Few places on Earth can match the biodiversity of Sarawak. More than half of Sarawak’s land area is covered in rainforests, making it a home to a large variety of flora and fauna, many of which are endemic.

Semenggoh Nature Reserve plays a vital role in protecting the biodiversity of Sarawak, by serving as a training area for orangutans. For over 25 years, the wardens at Semenggoh Wildlife Centre have been training young orangutans, who had been orphaned or rescued from captivity. The training is to equip them on survival, i.e. how to survive in the wild.

Today, this wildlife centre has a thriving population of healthy adolescent and young adult semi-wild orangutans, now breeding in the nature reserve.

Semenggoh Nature Reserve still receive visits from its successful semi-wild breeding graduates and their babies. They spend most of their time roaming the forest but during lean times, such as when the forests are low on fruits and edible plants, the orangutans do make their way back to the feeding platforms for supplementary meals.

Conservation Efforts for Orangutans in Sarawak

Entrusted to safeguard and sustain the amazing biodiversity in Sarawak’s forests, Sarawak Forestry Corporation (SFC) has in place multiple programmes and initiatives to ensure that the flora and fauna of Sarawak remains protected.

Among the programmes to conserve the species include protecting its wild habitats in locations like Batang Ai National Park, Lanjak Entimau Wildlife Sanctuary and the Sebuyau-Sedilu-Lesong protected areas. Surveys are also conducted to estimate the population of these animals. Other vital components of SFC’s work are eco-tourism, conservation education and community engagements and these are carried out regularly so as to rally support for the orangutans and their habitats. Degraded areas in the habitats are also identified for restoration activities like rewilding with native plant species.

To support all these expanding activities, SFC also engages in fund-raising. This includes organising adoption fundraising programmes, which raises funds for orangutan conservation and rehabilitation. The virtual adoption programme is open to all, citizens of the world and this is also an avenue for SFC to disseminate information about orangutan conservation activities carried out in Sarawak.

Show your love for orangutans with a symbolic adoption. Learn more about the gentle big apes and support SFC conservation works with an Orangutan Adoption Programme here: https://semenggoh.my/adopt-orangutan/

With a belief that educating the public is vital in orangutan conservation, the Semenggoh Nature Reserve welcomes visitors daily.

The best time to visit is during the morning (9.00-10.00am) and afternoon (3.00-4.00pm) feeding sessions when there is a good chance of seeing semi-wild orangutan returning to the feeding platforms for their supplementary meal.

SFC strictly adheres to the Ministry of Health’s standard operating procedures, the Parks and Nature Reserve Ordinance, 1998 and its Regulations, 1999, and organises only two sessions per day with a maximum of 175 visitors per session.

Besides orangutans, Semenggoh Nature Reserve is also a habitat for rare flora and fauna including the giant squirrel, pygmy squirrel, gibbons and splendid variety of birds.