On October 3 & 5 FMC- Film Music Contest & Awards 2021 announced the winners of all categories of the competition. 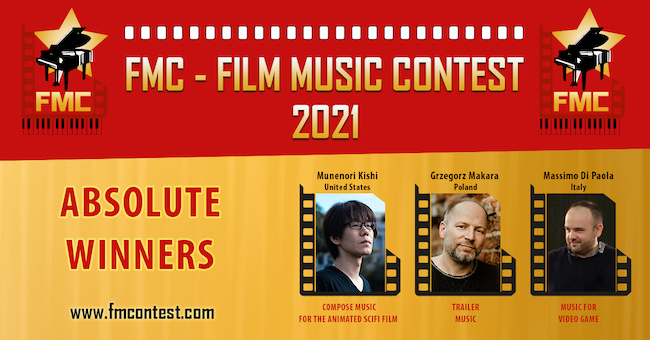 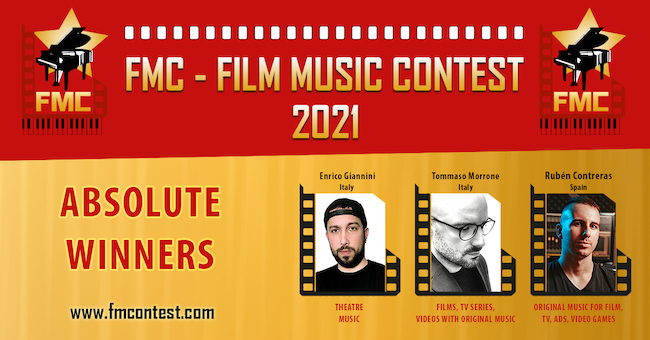 FMC is annually organized prestigious and influential international music contest and awards that seeks, promotes and rewards music composers, producers, musicians, instrumentalists from around the globe.

At the same time it is the greatest music contest of its kind in Europe for music composers of original music for films, TV, ads, video, games.

Competition entries from all around the world

High level of professionality, increasing interest and popularity of FMC contest in the world addressed this year music composers and musicians from more than 40 countries.

FMC thus created competitive environment of high quality, into which the contestants could enter their original music composition, or to make their music idea into an attractive visual being two competitive films and one video game this year. The contest also created an area for improving the composition skills of the composers, which was a source of inspiration for creation of new music, motivation for musicians in their music activity.

The final gala award ceremony was supposed to be in Iceland in its capital Reykjavik. It was there, where the international organizational team of FMC, together with its main organizer Mgr. Vlado Zeleznak Sr. and Mgr. Vlado Zeleznak JR., the director of the contest, planned to award all winners, together with a members of the prestigious jury, members of the international press, competitors and invited guests.

Worsen pandemic situation however changed those plans and moved the announcement of the results to on-line environment.

A-composer musicians, composers – members of the prestigious jury working for Hollywood, Asian and European film studios, television broadcasters, Netflix etc. decided on the winners. A full list of prestigious jury members can be found on the official FMC website.

“Incredibly talented musicians with beautiful music enrol into the contest. If it was up to us, we would award them all. Unfortunately, as it is always the case, there is only one Absolute winner.
Besides, we decided to award in each category also the second and the third place,” said the director of the FMC Mgr. Vlado Zeleznak JR.

In addition to the prestigious international jury and all members of the organizational team of FMC, one great Thank You is addressed to our media partners, which decided to inform the world about FMC and sponsors, including internationally successful music companies, such as Native Instruments, PSPaudioware, D16 Group and many others, which supported the most talented musicians and music composers all around the world. The winners will thus gain attractive prizes, which already know their new owners. All prizes can be found on the FMC website here: https://www.fmcontest.com/prizes-2/

The absolute winners of the FMC-Film Music Contest 2021 are:
Munenori Kishi (USA) – Music for the animated Sci-fi film- “To the Pathfinders of the Universe”
Grzegorz Makara (Poland) – Trailer music for the film ?The way of inspiration Iceland?
Massimo Di Paola (Italy) – Music for video game- “Air Missions HIND”

Watch the FMC 2021 Award-Winning scores for 2 official films and video game of this year below:
bit.ly/2WZfw6L

Listen to the winners in other categories here: https://www.fmcontest.com/fmc-2021-winners-listen-here/

For the complete results visit the official FMC website.

What does FMC plan for the future?
FMC is intensively working on a completely new project for all musicians, artists and film and music professionals, which is expected to be presented in 2022 under the name FMC Artist Platform. If you do not want to miss news and be informed about FMC, a good source of information is definitely the official FMC e-mail newsletter, to which you can subscribed on the official website.