Meanwhile, Clearstream is leveraged to connect to Euronext’s system, which will facilitate the trading of VTRX on the major exchanges of 14 European countries including those in London, Amsterdam, Paris, and Switzerland. Not long ago, TRON also inked a partnership with the US-based asset management firm Valkyrie Investments to launch Valkyrie TRON Trust. With the listings of TRON tokens on an increasing number of mainstream exchanges around the globe, TRON is clearly stepping up its efforts to expand in a compliant and transparent manner. 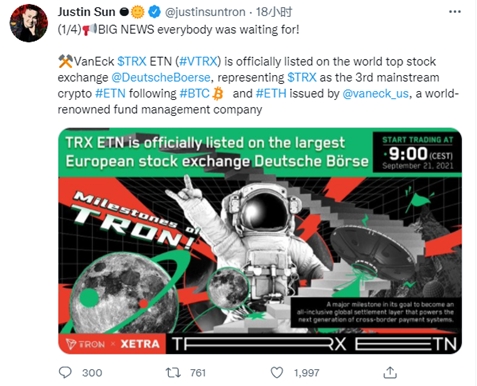 Back in 2012, Justin Sun introduced the concept of “blockchain” as a “value network” to China, which established him as an early advocator and adopter of blockchain in his homeland. Later, in 2017, he founded TRON. Till today, TRON is at the forefront of various competitive races including DeFi, NFT, stablecoins, distributed storage, staking mining, and staking. Moreover, it secured the third spot on the 25th CCID Global Public Blockchain Technology Assessment Index released by China’s Center for Information and Industry Development (CCID) this August. Today, Justin himself is going all-in on blockchain with the mission of ‘building a Chinese presence in this sphere’.

In January 2021, Justin Sun was specially appointed as a member of the Editorial Board of Information China Magazine, an authoritative national journal of China under the NDRC. Here, he has discussed with other experts and researchers of the industry the growth of China’s information industry. Prior to this, Xuexi Qiangguo (a public app featuring quality content administered by the Publicity Department of the Communist Party of China), The Study Times (the official newspaper of the Central Party School of the Communist Party of China), China Banking and Insurance News and other journals published Justin Sun’s article titled “Blockchain Redefines Trust in Financial Service”, garnering worldwide attention.

TRON has built a comprehensive ecosystem spanning from underlying protocols and smart contracts to NFT and metadata storage. With over 54 million accounts, it has handled a total of 2.4 billion transactions, settles over $6 billion per day, and contributes close to one-third to the circulating supply of stablecoins globally. The TRON Protocol, one of the largest blockchain-based operating systems in the world, offers high-scalability, high-availability, and high-throughput support that serves as the foundation for all decentralized applications in the TRON ecosystem.

TRON, as one of the world’s top three public chains, is not only committed to growing a scalable, thriving ecosystem but also to fulfilling the grand vision of the blockchain industry for mankind and the times. In his recent open letter to the community, Justin Sun mentioned that TRON is going to launch its layer-2 scaling cross-chain solution BTTC on October 30, 2021. With this release, TRON will form a closed loop of both layer 1 and 2 networks with sound cross-chain connectivity, which offers both a robust underlying network of the global human settlement layer and the heterogeneous scalable cross-chain network BitTorrent Chain that features high throughput and full compatibility with EVM. The cross-chain solution will usher in an era where all chains are connected and enable the smooth circulation of transparent and compliant digital assets worldwide.