In August, the US Senate approved the $1 Trillion Infrastructure Bill, as part of the $3.5 Trillion Budget Bill. Language in this bill suggests that $28 Billion in funding will come from enforcing tax-reporting requirements on cryptocurrency brokers. A cryptocurrency broker is anyone who buys or sells cryptocurrency. Just months earlier, Nasdaq stated that 17% of the US population, or roughly 46 million Americans, now own cryptocurrency. Further, research from The Ascent, a Motley Fool service, predicts that over 20% of Americans who have never before owned cryptocurrency, are expected to buy crypto in the next year. This would add another 50 million Americans to the team of crypto “brokers” tasked with funding the Infrastructure Bill. Are the fiat and crypto sides being pitted against each other? As capital flight shrinks the power of the US dollar, is Congress responding by taxing the ‘culprit’? 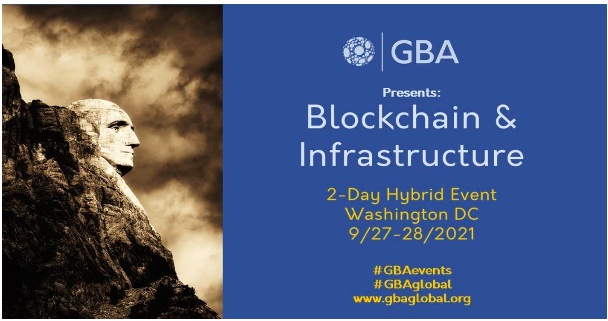 This fall, the Government Blockchain Association (GBA) (www.gbaglobal.org) has partnered with a coalition of blockchain associations to present Blockchain & Infrastructure, a two-day hybrid event coupling an educational seminar with a networking reception. As the debate over blockchain and cryptocurrency torches through Congress, one thing is crystal clear: government regulation of this technology is on the table NOW. Government policy makers need relevant information to craft the legislation being demanded of them. This 2-day seminar is a crash course in that education.

On Tuesday evening, September 28, GBA’s evening reception will introduce law makers and government leaders to the people and organizations using this technology in positive and productive ways. Creating open dialogue is paramount if we are to establish a healthy legal framework where consumers are protected and innovation and economic development flourishes.

For more information, including live and virtual Tickets, go to www.governmentblockchainfoundation.org.