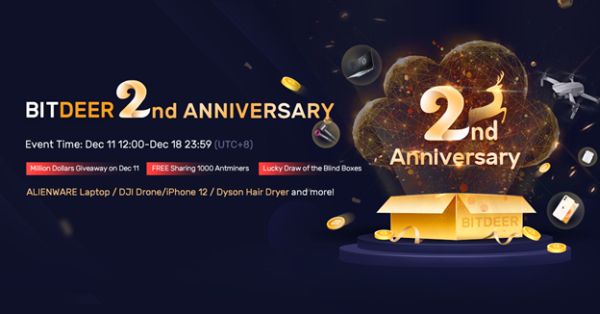 BitDeer.com, the world’s leading all-in-one mining and cloud service platform, celebrates the second anniversary of its business with a week of promotional activities, which includes the opportunity for users of its mobile application to redeem computing power for free, along with other prizes.

To commemorate its second anniversary, BitDeer.com is launching a week-long promotional campaign to give back to its users for their continued support. In the past, BitDeer.com has released various incentives for different occasions to bring more benefits to their users, which includes the first-ever Wet Season Festival held this April. For the second anniversary, the prizes up for grabs include free cloud hashrate from 1000 of their mining machines, electronics, gift coupons, blind box prizes and more. The promotions will center around the recently debuted BitDeer.com mobile application, allowing customers to access the one stop platform at their fingertips.

From December 11th to December 18th, 2020, mobile app users of BitDeer.com who log in and light a candle on an app’s birthday cake will all be eligible for prizes. They range from mining extension coupons for 36 days, hashrate fee coupons for up to $500, as well as BitDeer.com souvenirs. Users who share their purchase receipts have opportunities to win free cloud hashrate from 1,000 Antminers, JD.com coupons worth 1000 Yuan, and electronics such as the iPhone 12 and the Dyson Hair Dryer. Customers who successfully refer a friend to BitDeer.com for registration will receive a variety of coupons, as well as double the commissions, while the new customer from the referral gets a newcomer gift bundle. In addition, there are 5 blind box prizes with special mining plans, as well as promotion plans exclusive for the anniversary event. In addition, users who have accrued $30,000 worth of computing power with their cloud hashrate plan during the event period and are ranked in the top 3 can enjoy added prize privileges, including ALINEWARE computers, DJI drones and Apple Airpods.

Within 2 years, BitDeer.com has solidified its position in the industry as a leader in mining and cloud service industry. The successes of the platform include being the first to offer plans for the widely-sought after S19 miners, and the launch of its S19 Pro Acceleration plan. During the span of its operations, BitDeer.com has shown their dedication to offering services that suit the needs of its customers according to the market and will continue to serve its users with their expertise. Most recently, BitDeer.com introduced their Cloud Hosting Service, which is a new line of service launched in collaboration with their strategic partner, global mining equipment giant, Bitmain.

BitDeer.com is the world’s leading computing power sharing platform, enabling global users to mine cryptocurrencies in a transparent, reliable, and convenient way. It saves users from the complicated process of purchasing, installing, and hosting mining machines. Individual miners can enjoy the service with just one click.