Indonesian Minister of BUMN (State-Owned Enterprises) Erick Thohir, promoting the vision behind his BUMN Go Global program and cooperation between the ministries required to make the program work, has been articulate in encouraging the country’s massive State-Owned Enterprise (SOE) sector, presently more than 100 companies and 800,000 employees, into action towards developing more rapidly in the global business arena, while inking a Memorandum of Understanding (MoU) for Economic Diplomacy and Support of the program with Retno Marsudi, the Minister of Foreign Affairs (photo below.) 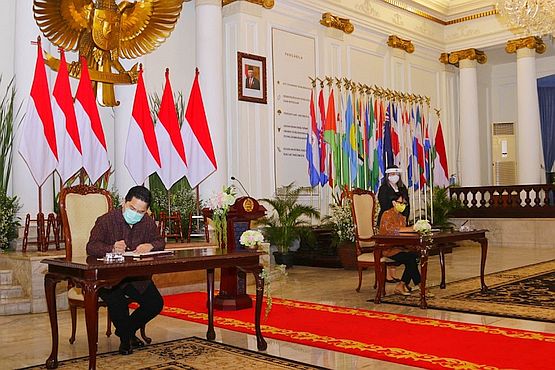 Based on dynamic data collected from key govt representatives, Indonesia’s SOE sector accounted for some US$17.5 billion in outbound investment last year, commercially reaching around the world, but as Erick Thohir points out, without any particular strategy. The Go Global agreement between the ministries is expected to remedy this situation, increase the value of SOE investments abroad, and encourage the country’s export performance. In addition, the cooperation area also includes match making efforts between SOEs and foreign investors interested in making inbound investments into Indonesia in accordance with their sectors of interest.

“BUMN launched its Go Global program to support Indonesia’s Supply Chain in marketing products in strategic markets. Now this is a special momentum because there is a common awareness and vision to encourage the development of BUMN (SOEs) in the global market, so as to increase the number of SOE outbound transactions and investment value, and advance Indonesia’s leadership abroad,” says BUMN Minister Thohir, at 50, one of the youngest members of Jokowi’s second cabinet, and a successful media tycoon known internationally for his former ownership of football teams D.C. United and Inter Milan.

So far, several State-Owned Enterprises (BUMNs) have ventured overseas, among them PT INKA, which has established a joint railroad project with the Bangladesh government, defense SOEs that export various products such as the Elite G2 Pistol, Bullet Ammunition, Medium Tanks, Cargo Ships, CN 235-220 Planes, and others. In addition, Bio Farma has produced and marketed polio vaccines in various countries such as Angola, Somalia and Ethiopia.

To achieve Erick Thohir’s lofty BUMN goals, the two Ministries agreed to the possibility of forming a tactical team consisting of representatives of the two Ministries as well as BUMN representatives who have the readiness and capacity to carry out outbound investment. This special tactical team will collaborate as exploratory partners in identifying investment opportunities and access to capital through to the implementation of investments and the protection of Indonesian investments abroad. The MoU is valid for up to four years, and will be regularly monitored and evaluated.

“The formation of the Go Global Joint SOE Team between the Ministry of Foreign Affairs and the Ministry of SOEs is intended to synergize the development of SOEs in the global market and increase cooperation with strategic partners,” says Foreign Affairs Minister, Retno Marsudi. “It is hoped that the cooperation and assistance regarding economic diplomacy can expand the partnership network, the potential for BUMN investment and the opportunity to market SOE products on the international scene.”

“Thus, the BUMN Go Global program has two main objectives,” says Erick Thohir. “The first objective is to market SOE products that have already established some demand in multiple countries or markets, while the second objective is to improve the Supply Chain in Indonesia. In the past, Indonesia was only ever seen and treated as a domestic market. The BUMN Go Global program also hopes to help facilitate SOEs in acquiring enterprises in foreign countries. This will in turn ultimately rectify the supply chain in Indonesia.”

Christovita Wiloto, Founder of IYE! (Indonesian Young Entrepreneurs), is optimistic about the BUMN Go Global strategy, saying, “It’s about time that Indonesia’s State Owned Enterprises go global and it’s only natural that we are no longer satisfied only competing domestically. While it’s true that our domestic market is full of potential and should not be neglected, Go Global is the strategy that should be implemented as soon as possible so that Indonesia may not only survive, but thrive.”

Indonesia Young Entrepreneurs, known as IYE!, is a global network of young Indonesians with entrepreneurial spirit, across all industries. With over 50,000 members based around the world, the IYE! organization acts as a platform to bring together young minds that are resilient and have integrity. In regards to the BUMN Go Global strategy, Christov asserts that SOEs and the business world in Indonesia are ready and more than capable of competing at the global level.

What we urgently need is to solidify a clear and consistent strategy that will give guidance to the Go Global program. The steps that the Ministry of BUMN and the Ministry of Foreign Affairs have taken have been celebrated by tens of thousands of Indonesian Young Entrepreneurs across Indonesia, who are already fighting to break into the global market with a plethora of goods and services that they have continued to develop and perfect, Christov emphasized.

“The Go Global strategy has the potential to lift the standard of quality among Indonesian businesses in all aspects, whether it be integrity of individual character to the sophistication of the goods and services themselves. At the same time, this program will introduce a variety of disruptions in all aspects, which will work to turn the wheels of revolution within the world of business in Indonesia, in an integrated manner,” Christov further explained. “Strike while the iron is hot: taking advantage of the moment, when the momentum is right in Indonesia.”

BUMN Minister Erick Thohir believes that the country has reached the stage and a special momentum in its capacity to develop SOEs for the global market , and to advance Indonesia’s leadership in the international arena. Factors that support this are, among others, a common awareness and vision to encourage the development of SOEs in the global market, which acts to increase the number of transactions and the value of outbound SOE investments, as well as to advance Indonesia’s leadership abroad.

Collaboration between Indonesian government agencies has been intensified by the recent Onward Indonesia Cabinet, so the Indonesian economy will have the power to recover quickly following the COVID-19 pandemic. Moreover, this collaboration is further fortified by an aggressive strategy which ensures that every step taken promotes Indonesian competitiveness in an increasingly fierce global market.

The Executive Talk by ShareInvestor: Boutique Corp PCL (SET: BC)