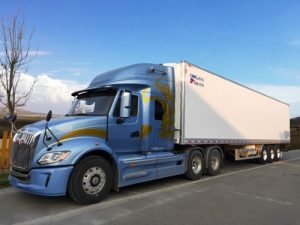 A few important policies have been released to support the ongoing development of the manufacturing industry. These, along with the deployment of policies in recent months by the People’s Bank of China, China Banking Regulatory Commission and other departments, help to guide the financial industry in increasing support for manufacturers. All signs show that these policies have somewhat favoured the overall profitability of the manufacturing industry. Among which, CIMC Vehicles (1839.HK), which has received much attention since its Initial Public Offering (“IPO”), has rallied much faster than many of its counterparts and continues to outperform the market.

The report also pointed out that the total amount of cold chain logistics in 2018 accounted for only 1.7% of total social logistics, which is still far off the numbers being registered in developed countries, suggesting that the industry is still in its early stages of development. With the development of cold chain logistics towards warehouse integration and logistics automation, the research and development (“R&D”) as well as production of cold cars and core components for cold car demand has ushered in huge new business opportunities.

CICC’s report released on 12 December 2019 stated that China currently has about 53,000 refrigerated trailers, and that it expects China’s long-term refrigerated trailers penetration to reach 1 million units and market volume to hit RMB 40 billion (excluding tractors). The report pointed out that, as the industry leader, CIMC Vehicles had a market share of 9% in China in 2018 and that its products have certain advantages in terms of light weight, thermal insulation capacity, durability, and order response speed. It found that with the enhancement of product standards, CIMC Vehicles is expected to ramp up its market scale on the basis of size and product strength. CICC believes that as the sales structure of domestic refrigerated trucks shifts towards refrigerated trailers, the average selling price (“ASP”) of CIMC Vehicle’s refrigerated trailer products will generally rise, echoed by increased downstream demand driving growth in related businesses.

In addition, CIMC Vehicles is expected to continue benefitting from changes in the market structure driven by economic transformation, industrial upgrades, and the gradual increase of industry concentration, to become the biggest beneficiary under current market conditions.

CICC’s two recent industry reports also focused on CIMC Vehicles. Together with earlier reports by Haitong and CMB, various signs have indicated CIMC Vehicles is gradually gaining the attention of investors, with its stock price outperforming the HSI. The stock price of CIMC Vehicles began its ascension in September 27, and has so far rallied by over 38% from its low. Compared with the HSI, which hit its low in early October and has so far rebounded by only 7.17%, CIMC Vehicles has clearly made a positive impact among investors.

The market has also shown signs of continuous acceptance of CIMC Vehicles’ fundamentals and policy expectations. The implementation of the new national second-generation semi-trailer standards and the Chinese government’s moves to further enforce overload regulations will provide further momentum for the development of CIMC Vehicles. The company proposes a “Trailer Pioneer” product that complies with the second-generation national standard in order to help consolidate its market share in China and further enhance the company’s bargaining and pricing power as a domestic industry leader.

As the market continues to pay attention to Sino-U.S. Trade negotiations, the actual impact of these talks on CIMC Vehicles is under company’s control. CIMC Vehicles sells three models in North America, of which the van trailers are produced and assembled locally in the United States, and some parts of the refrigerated trailers are purchased in North America, meaning that trade friction has limited impact on these two models. Chassis trailer, which are produced in China but assembled in the United States, have limited exposure in the short term. However, the company’s post-IPO expansion plan includes increasing the capacity of refrigerated trailers in North America. The company’s recent announcement states that, in addition to retaining the new refrigerated trailer project in Monon, it is also setting up a refrigerated trailer assembly plant in Canada. The company will flexibly adjust the supply chain of chassis trailer in accordance with the latest trade situation in order to better deal with the impact of tariffs. Market expects that CIMC Vehicles is making its best efforts to reduce the negative impacts of tariff adjustments. As these uncertainties are gradually lifted, the market will naturally return the investment value of our shares.

CIMC Vehicles is one of the few representatives of smart and high-end manufacturing in the Hong Kong stock market. It is also a global leader in segmented fields, occupying a leading position within the industry. As an advanced manufacturing company with a unique investment concept, CIMC Vehicles currently has “low valuations and high dividend returns” for investors.

Compared with other high-end manufacturing shares in other Hong Kong stocks, such as Weichai Power (PE ratio 10.45x) and Sinotruk (PE ratio 8.12x) etc., CIMC Vehicles was rather undervalued with PE ratio around 6.94x. As the market becomes more familiar with CIMC Vehicles, the company’s valuation is expected to rise sharply.

As a leading state-owned company in a segmented industry, CIMC Vehicles landed quietly in the Hong Kong capital market and is gradually becoming recognized by the market. CIMC Vehicles is indeed at the forefront of industry development, it is certain to benefit from the opportunities brought by the increase in industry concentration, comprehensive industrial upgrades, and product enhancements. Under the influence of favourable policies, investment highlights of low valuations and high dividends are gradually being recognized by investors. CIMC Vehicles, having unique investment value and being a relatively stealthy target in the Hong Kong stock market, is expected to continue to attract investors’ attention.

IDC Industry Will Benefit from the Growth of Cloud Computing GDS...